If you are a horse owner, or like us and are horse caregivers, one of the last things you want to hear is “your horses are out”.  I can’t describe the panic that comes over you when you hear those words.  We were having a quiet saturday morning working on the 3rd or 4th cup off coffee when our neighbors drove up the driveway with the dreaded news.  The horses were out of the paddock and on the road.  The whole house went into high gear.  It was a pretty cold morning so the Carhartt overhauls were flying on fast.  I chose my little slip on boots instead of my big snow boots because I didn’t know if I would have to run.  At the end of the driveway was a welcoming site.  The horses were eating a bale of straw outside of the hay tent.  They must of followed the neighbors down the road when they came up the driveway.  We got them in halters on led ropes and checked out where they had gotten out.  Our mouths were pretty much wide open when we saw the damage they did to the fence.

My dear husband was not happy.  He had built the fence when it was 100 degrees out last July and now would have to repair it when it was 15 degrees out.  The good news was the sun was out and shining nicely.  We thanked our neighbors for coming to get us and they replied ” we just watch out for each other out here.”  I’m so glad they did. Thanks Don and Jan!

The project for the day was suppose to be the chicken coop but after the horses decided to become escape artist our plans changed.  As my dear hubby worked on the fence our 15 year old came home from work.  She had called for a ride home just before Don and Jan came.  When we didn’t come and get her she called a family friend for a ride.  Thanks Greg.  She and I decided to install the new fencer.  The old one had burned out last week.  I was hammering in a nail and missing every 3 or 4 times so she wanted to do it.  She was missing every other time so we started to get the giggles.  Well, it is even harder to nail something while laughing so this project took us twice as long as it should of.  When we got done she looked at our mini and said “I think I should ride him”. I said “go ahead”.

Here is a picture of her on our mini named “Fat Chance”.  The other horses didn’t think the whole thing was funny and kept running and kicking up their heals.

Some times projects need to be put on hold just so you can have fun.  Boy did we have fun!  Did you get a project done or did you have fun?

As a photographer I have bins upon bins of pictures and hard drives upon hard drives of  images. They need to be sorted and organized every once and awhile.  When I do that I come across a few that are worth a second look. The image of a glacier in AlaskaI named “Challenge yourself”.  I wasn’t climbing the glacier like the climbers were but I was challenged just by getting the image photographed.  My asthma was pretty flared up with all the altitude changes we were making in a day.  I insisted on bring my camera gear everywhere.  My pack was heavy.  That is as far as I could go with out going into a full-blown asthma attack.  I picked a spot and started shooting all around me.  It reminds me to “keep challenging myself but everyone’s challenges are different and that’s okay”. 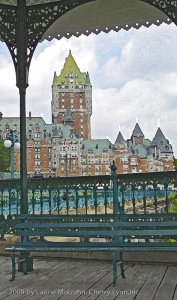 The 2nd image is from a last-minute trip we took to Old Quebec.  My best camera was being fixed so I had only a Nikon film camera, my Hasselblad (film also) and a Digital point and shoot with me.  It was a challenge to not shoot how I was used to shooting. The images where amazing because I was thinking in a whole different way while I was shooting.  This was also when I started learning how to use Photoshop.  Now that was a challenge!  What’s your project today? Is it a challenge?

The weather has been warm for up here in the northern USA.  So my dear husband started and outside project.  We have this problem and I think a few of you may share it.  Space yes we don’t have enough storage space. My dear hubby would say it is we have too much junk but even junk needs to be sorted and dealt with and we didn’t have the space to do that.  He started building a 12×12 little barn for a storage shed.  Not having a lot of moo-la to play with he took some timber beams he had been given and cut them up for the lumber to frame it. I think it is turning out cute. 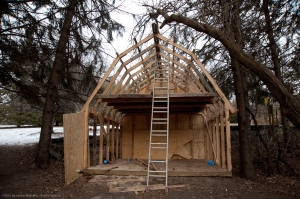 So he gets his little barn and I get my chicken coop.  What is your latest project?

side of the little barn

I’ve been wanting chickens since we moved here.  My dear husband just isn’t into animals like I am.  Let’s just say he has been dragging his feet when it comes to chickens.  He doesn’t want to be tied down anymore than he already is.  Which is very funny because we are tied down plenty already with 2  1/2 horses (1 is a mini that’s how you can have a 1/2 a horse) and 3 dogs.  The gardens in the summer need attention and well we are just tied down.  We were talking to a group of our friends and he mentioned I wanted chickens thinking they all would be on his side but to his surprise they all said ” let her have chickens they’re so easy”.  He started to talk about plans for the chicken coop.  Sometimes it just takes him awhile to warm up to an idea. I had been looking at coop ideas and so I was already to sit down and plan my dream coop. Looking at Craigslist one day I saw a cute little shed for $50 listed.  Made a call on it but didn’t get a call back.  Figured it sold.  A week later the guy called back and asked if we could move it.  My dear hubby assured him he had the means to move the shed.  “Well come and get it then. I’ve had two other people come and they couldn’t figure how to move it.”  My hubby hooked up the trailer and was off with in the hour.   It was getting dark when him and our son-in-law  got back but they brought me my chicken coop.  I was tickled pink.  So the chicken coop project has begun.  So what’s your latest project?  Have a great Valentine’s Day dreaming up some projects with your sweetheart!

wall before being painted

We have more light in the living room now.  It is a pretty gloomy winter day and no one turned a light on this morning to see.  So the goal to lighten up the living room was achieved.   My dear husband is such a good painter.

Two light days of work, for him, and the whole living room, hall and entry is all painted.  The other thing we came up with to let more light in was replacing the front door.  The solid door just wasn’t cutting it.  My dear hubby found a 2  leaded glass doors at one of his favorite lumber yards.  They sell new and used lumber.  He sent me a photo of both on my phone and I picked one out.

I think the pattern in the leaded glass fits where I’m trying to go design wise in this house.  Besides I love when I can reuse instead of buying new!  On to the next project.   What project do you have going on?

My chicken coop project is underway!

Today started out with more baking.  This time I needed to make enough cookies and bars for 300.  This is a special baking session because my husband is joining me in baking.  The cookies and bars will be served at a memorial service for his childhood friend. As you can imagine we were a bit more somber while baking than normal. He mixed up the chocolate chip cookies while I started on the brownies.

I decided to dig out my Grandma’s Sugar cookie recipe.  It is from back when I had my bakery. Yep back in the 90s I had a little sweet shop.  Well this recipe isn’t really my grandma’s but it came from my sister-in law and if I remember right it was my husbands and her grandma’s recipe.  Anyway it was a big hit at “The Cake and Cookie Company”.  It is a pretty big recipe but maybe someone out there has a big mixer like mine.  That photo of the vintage Hobart mixer it is not a stock photo.  That baby is mine.  She is a 1950s 3 speed, automatic transmission, 10 quart mixer and she is smooth!  Here is the recipe cut in half.

Cream the first 6 ingredients together well, mix in vanilla.  Mix the rest of the ingredient into the creamed sugar and eggs.  Use a scoop to place on non-greased cookie sheet sprinkle with sugar and bake at 375 degrees for 10 minutes.  I like mine a little more brown so I let them go 12 minute.  They smell wonderful…on to the next project.  What’s your next project?

Besides the project to get more light into my living room.  This has been a week full of baking bars. Now I’m not talking a couple of pans of bars here.  So far I’ve baked five  kinds of bars this week … END_OF_DOCUMENT_TOKEN_TO_BE_REPLACED

Yes I need light. I’m just one of those people who do not do well without lots of light. The need for light is what brought this project on. For an introduction to my story see the “about” page. I left off on the “about” page with my hubby and I having a date to get paint samples. 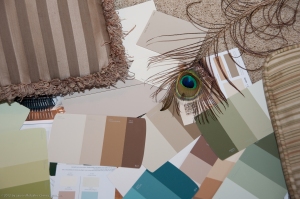 It all starts with a few samples..

When I look at samples I lay them on the flooring the paint will be next to. I bring in the fabrics for the room and something I love at that moment. You guessed it I’m into peacock feathers. Have been for awhile now. So since I’m being pretty neutral in my wall color I know I will need lots of fun color to play with. Hence the peacock feather.  The winning color is…Pecanwood.  I bought 2 gallons of Dutch Boy paint in an eggshell finish.  Next prep the walls for paint.  The previous owner had a lot of things on the walls so spackling we will go! 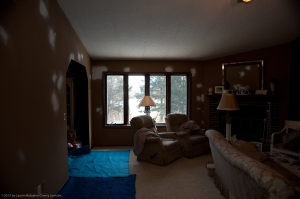 So dark I need light!

I’ve been trying to get this blog up and running but projects just keep calling my name. That’s what I plan on blogging about anyway so I guess it will just give me more to write about.