Today was not one of my usual busy day.  Unless, I usually hold alive hawk in my arms.  While waiting for my granddaughter’s kindergarden bus a hawk flew into the power line above our heads.  It made the wire make a weird twinging sound. As I looked up the hawk was being catapulted off the wire toward the ground head 1st. It landed 10 feet from us.  I shoved the mail into my grandkido’s hands and ran to the poor bird.  It’s butt and legs were in the air. The face was on the ground with it’s mouth open and tongue lying in the dirt. I thought it was dead but than it blinked it’s eye. I took off my sweat shirt jacket wrapped it tight around it’s wings and covered the head with the hood.  I put the talons under my arm and held it tight as I headed to the house.  After putting my granddaughter on the school bus of course. 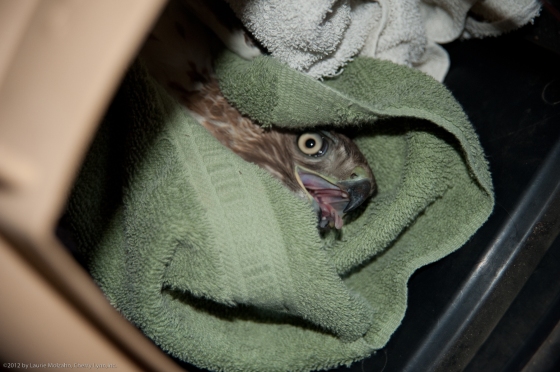 I came in the house and told my daughter “I have a hawk”.  She said ” a what a where?”.  I said I was holding it.  She flipped open her ipad and said “who do I call?”.  Like this was an everyday thing we do.  She tried the DNR but just got a voice mail.  I called my friend Melinda but got her voice mail too.  Her boy friend had rescued an eagle this past winter so I knew she would know what to do.  My daughter called the Minnesota Raptor Center at the University of Minnesota.  Again a voice mail.  This time she left a message.  By now I had put the hawk on a foot stool and had picked up my phone to place calls too.  The Raptor Center called back and instructed us on how to transport it to the Raptor Center for treatment.  I needed to get my jacket off it so I grabbed a beach towel and a hand towel and started to unwrap it. This was the scariest part. I couldn’t get my jacket loose.  It was then that I realized the hawked had wrapped it’s talons around the string tie on my hood. I covered his head well and started to get the tie out of it’s grasp.  The talons were so sharp and the feet so rough it took a minute to pull the material away. We used our dog pet carrier and I placed the bird in tail and feet 1st while keeping his head covered the whole time.  We loaded it into the van just as the bird started to come back around.  It was flapping and hitting the carrier hard. My daughter said “cover the cage”. I grabbed another towel laid it on the carrier and we were off for an hour drive with a hawk in the van. The bird settle down right away.  So much that I keep saying “it didn’t die did it?”. We made it to the Center fine.  They were ready when we arrived.  After asking what happened the carrier, with the towel over it, was rushed to the vet.  We filled out an information form and were showed around on a tour for a few minutes.  Before leaving I asked if it was a red tail hawk because I hadn’t seen the red feathers in it’s tail.  She told me it was a red tail hawk but it only was about a year old so it didn’t have the red yet.  The hawk was doing well when we left.  They informed me that on 1st exam it didn’t look like anything was broken.  They would nurse it back to health and then they invited us to the next release because if it was well it would be released then. Being a photographer I have always loved raptors.  Watching and photographing them has been a passion of mine.  So much so that my dear husband and I go “hawking” in our spare time. I am sad that this poor hawk was hurt but it also was wonderful to hold and see this fabulous bird up so close.  I pray it recovers from it’s fall. 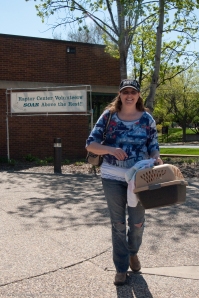 Being a grandma I love all the pictures and love notes I get from my grandkids.  Wanting an easy way to display them , besides the fridge door, I have been tossing ideas around my noggin for a while.  A few weeks ago I found a partial old screen door on our local facebook garage sale site.  One of the decor ways I have been trying to go is move toward “Farm Chic” instead of my “Schnadig Chic”.

So chicken wire and the old door seemed to be made for each other. A few staples later and a “new place for all that art work” came to life.

The rooster was a buy at one of our local occasional sales shop. My grandson (7) said “we have to buy this rooster Amma!”  So of course we did.  He was a cute center piece on our Easter table. What is your latest project?  Come on show me!

My chicks are doing great.  The broilers are really getting big.  I love feeding the hens out of my hand.  They come running to me now as I come in the coop.  Really, raising them is more fun than I thought it would be.  I thought this would be to teach the grandkids that food just doesn’t magically appear but someone had to work for us to eat it.  We have had a couple of hen parties in the coop. 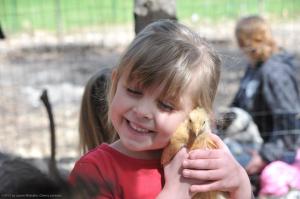 The grandkids love to bring their friends over and show off their hens.  I made way to many potatoes for Easter but my girls helped me out.  They ate a whole pie plate full and were looking for more.  My dear husband did a great job with the coop.  The fence is up and on warm days the chickens have been outside.  He likes things  more rustic then I do but for a coop it is a cool rugged look. 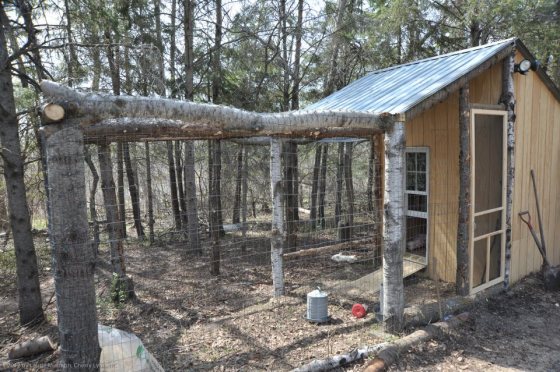 With watering them twice a day and washing up their feeding trays I think I need a garden sink of some sort.  After looking on the web and thinking about it I have a few ideas.  I need it for washing veggies, potting plants and now for watering the chickens.  I have always held to “form follows functions” but with a garden sink I think it might be more like “form follows FUNKtion”.  Got any ideas you would like to share? What is your latest project?